Today I had the fun opportunity to join in a photo op of Rotary International Members and Bill Gates, I’m just about dead center in the photo, just to the left of Gates!

I first learned of Rotary International’s efforts to eradicate polio in 1993, as I was preparing to be a Rotary Youth Exchange Student to Finland.  I vividly remember watching a video that spring that left me inspired.  While I had already made up my mind to be a Peace Corps Volunteer around age 8, I’m most certain that my early experience with Rotary led very much to the career that I have today.

Not only did my exchange get me on a plane for the first time and allow me to live abroad and get the travel bug, it also instilled in me wanting to do more and to give back.

Rotary has now contributed more than $1 BILLION over the past two decades to eradicate polio.  In 2009 Gates decided it was a cause worth contributing to, and pitched in $350M, challenging Rotary to raise another $200M.  Recently Bloomberg has pledged another $100M to add to the End Polio Now campaign.

While there is something to be said about giving millions of your own money to a very worthy cause, I love thinking about all that Rotary did over the years to contribute to that $1B.  With 1.2 million members worldwide, I am certain that nearly all of them have contributed something, in either money, time or both.

Beyond the money itself, it took a dream. A vision that likely seemed improbably to achieve when they first started on this journey.  The last steps to eradicate polio are taking place in Afghanistan, Pakistan and Nigeria, and we won’t quit until we are done.

We are “this close” now! 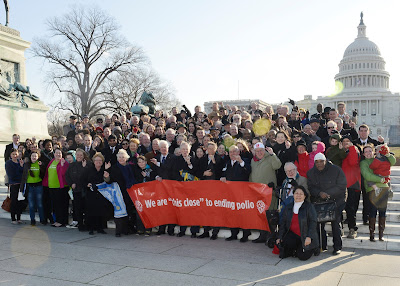 This close!
Miel
Posted in Blog