Today would have been my Grandma Jones’ 97th Birthday. When she passed away at age 94 she was a lucid example of aging with grace. My last conversation with her was via Skype from eastern Congo. We discussed the news and politics.

It always struck me when we spoke while I was abroad how much things have changed over a lifetime. When she was my age travel was a whole different experience. My grandmother got such pleasure from following along vicariously with my adventures that I felt I was doing her a service to continue on my travels.

I loved it when I announced I was headed to Afghanistan, only a year after getting married, she didn’t bat an eye. In fact, she surprised me when she pulled out a copy of Kite Runner, which she had put on hold at the library to get upon its release in large print. I hadn’t heard of the book myself at that point, but I recall thinking that it was likely that I might not want her to know all the gritty details of the war zone I was headed to.

In her 80s my grandmother was suddenly interested in going to Portugal. With no real connection to the place, she was curious to travel there. I ended up there myself after college, and only wish that she could have traveled there herself.

In the end, she never had a passport, but she had her own kind of adventures for her time. She grew up in Indiana and was a secretary in Chicago as a young woman. She waited until 25 to get married and had her first child at 30 and her third at 40. She always encouraged me to follow my own path. 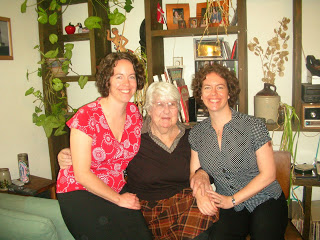 Here is a picture of Grandmother Barbara Jones with my twin sis and I when I was on leave from Afghanistan; I’m on the right.  I only wish I had pictures of her when she was young to share as well.