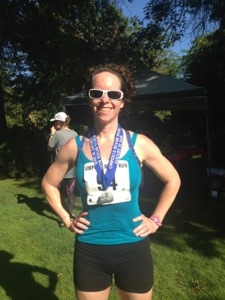 As I prep myself for the morning, I read the title of my latest book from a different angle. “I’ll seize the day tomorrow” shifts from a procrastinator’s perspective to one of anticipation.

I was about ready to run my longest race thus far, my first half marathon (13.1 miles). There are some days when I am still in awe at having become the runner that I now am. I recall somewhere back in my early thirties that I dreamt of run a half marathon sometime before 40, and at his rate I will be adding a marathon to up the ante.

There are of course other days, running along side marathoners, where I feel that it is “just” a half. Then again, a few months ago the longest I had run was a 10k (6.2 miles). I can certainly feel the difference.

I finished third in my division, the eleventh woman overall, and 39th amongst the three hundred runners in the first annual Umpqua River Race. I finished right at 2 hours, or a 9 minute mile. It isn’t my fastest, but it felt good to do it.

It was a beautiful race through my old stomping grounds, in Roseburg, Oregon. Running past the old movie theater in the final stretch, I couldn’t help but think of being there as a kid. In several spots the river rose into clear view and I was reminded of where I spent my summers as a child. I was also joined by several family friends and teachers from our community, as well as my folks to meet me at the finish line. The race was very well organized and sponsored the Boys And Girls Club of Roseburg.

It felt good to have my first half on familiar turf. I am certain it won’t be my last. I was back out running in Portland this morning and it felt great.

Get out and Run! 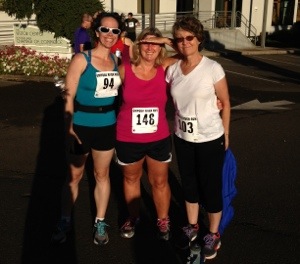 Posted in Oregon and Beyond and tagged Oregon, Run