Watching the situation unfold in Boston is sobering. As a relatively new runner, I dream of getting to my first half-marathon and marathon. The runners today were just like me. No different. They just happened to be to their dream already.

Yesterday I had a excellent run down to North Capitol and the South Capitol for a couple of get togethers. Before I would have never dreamed running that far. While it was only a five mile run, it felt like quite a distance in crossing over into other quadrants that feel further away than my normal routes.

My thought after my run was that I could run anywhere in the city if I wanted to. The thought gave me a certain amount of freedom. Having only taken me 30 minutes to reach Union Station, which might likely take me that long via metro, it felt a bit like having my own self propelled exit strategy.

Watching the runners in Boston, it is clear that while being able to run for your life might have some advantage, it isn’t something that anyone ever wants to do. My heart goes out to runners and their families everywhere.

It turns out the one of our Rotary club members from Boston was friends with one of the few people that died in the tragedy. When I learned of this, my heart went out to a friend whose world will never be the same. It also made me think further on how interconnected our small world truly is.

When there was a bombing at the Serena Hotel in Kabul nearly five years ago, I was somehow linked to numerous victims. Living just more than a mile from the White House, I also can’t help but think if something like this, or Sandy, or the next tragedy lands in our back yard. Let’s hope not. 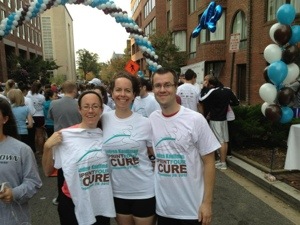