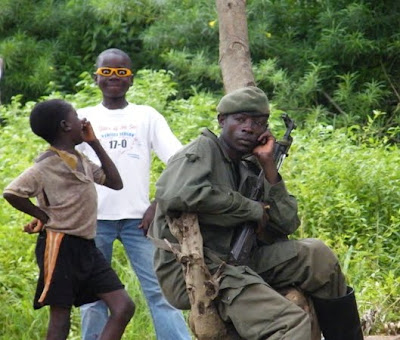 Neither peace nor war. It says so much. This is how eastern Democractic Republic of Congo was described in a report that was developed on the joint assessment trip that I wrapped up last week (though I’ve stuck around DRC – in Goma now – for a couple of additional weeks).

As you can see from the photo that I snagged above, Congo’s military presence has grown board of fighting (though this doesn’t stop daily attacks) and the civilians of Congo are fatigued from years of war (though these kids are clearly still enjoying being kids).

Eastern DRC, North and South Kivu in particular, are now at a stage where they are being pushed into development – ready or not. Relief donors are starting to wane, though development donors still haven’t made their way fully into the region. It is the typical development story. We’ve seen the damaging effects of the relief/development gap in places like Sierra Leone and Liberia, but still the issues remain the same.

A nation in flux. Not sure whether to attribute random gun fire yesterday in Uvira – the second largest city in South Kivu where I was last week – to actual war, or just because the unpaid militias are upset and decide to start firing within the city. I guess it depends on your definition of war. I certainly don’t call it peace. At least not yet.

Congo still has some time to go to reach peace, but perhaps it is on its way. Perhaps not. While donors talk of development, civilians are talking of things getting worse before they get better. We’ll see who is right in the end.